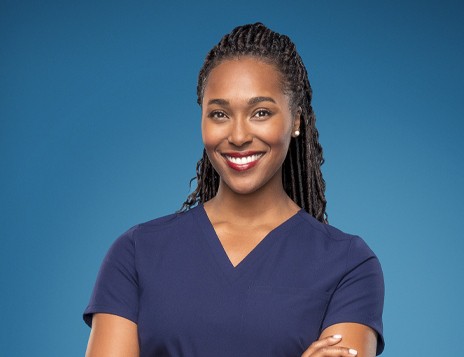 Dr. Ebonie Vincent is an American foot and ankle surgeon. She made her name on the famous TLC series My Feet Are Killing Me. Co-starring with fellow foot specialist and prominent figure Dr. Brad Schaeffer has helped her become a better doctor.

Her specialty stems from her unique method of performing foot surgeries.

This includes corrective and reconstructive foot, ankle surgery, and pediatric foot condition, all with minimally invasive surgical techniques. Those who have been following her career know that she is extremely gifted in handling patients.

Ever since appearing on the hit reality show, Dr. Ebonie has garnered thousands of fans interested in her personal life. We can also see in her social media that she is an influencer who posts hundreds of pictures.

However, she rarely posts anything regarding her love life which is cause for concern. Dr. Ebonie later revealed that she was, in fact, in a relationship with someone. During Valentine’s Day in 2021, she revealed to the whole world that she was dating a man named Alvin Anderson. In fact, it was their first Valentine’s together as well.

After years and years of being single, Dr. Ebonie Vincent finally found the love of her life. Even her fans were congratulating the duo and sending out messages of support.

Alvin is a 36-year-old IT consultant, day trader, and betting expert. But above all, he seems to be a die-hard NBA fan who is often seen attending multiple matches.

Moreover, he is a man who loves to live a life of freedom. While others hardly get time away from their hectic work schedules, Alvin takes the time to travel to different places, making money from trading and betting.

Net Worth and Salary

Dr. Ebonie is a professional podiatrist who has been working in this field for a long time. Moreover, she even showcases her work on television. According to numerous reports, an average podiatrist generally makes around $232,480 in Orange County. Hence, her salary also falls under those figures.

Furthermore, she is also a star of the hit reality show that airs on TLC. It is no doubt that by working in such a prominent show, she has a hefty pay rate per episode. Hence, Dr. Ebonie Vincent has an estimated net worth of $1 million as of 2021.

Dr. Ebonie Vincent was born to Eugenia Vincent and Dr. William Vincent. Her mother was a dean of student services at Moreno valley college, a position she held for over 30 years. On the other hand, her father is a scholar who used to be an Educational Consultant and a professor at Riverside City College.

Looking at her old man, we learned that he almost died on route to see Dr. Ebonie graduate from college. He began developing a blood clot and had to be rushed to the hospital. Ebonie considers that incident to be one of the most life-changing moments of her life.

Regardless, as successful as the parents were, the children equally turned out to be winners. She has a brother named William Kyle, who is a doctor of medicine.

He earned his bachelor’s degree in biology from Morehouse College. Additionally, he received his doctorate from Wake Forest University School of Medicine. Currently, he is serving his duties at Rancho Family Medical Group.

Vincent got her undergraduate degree from Hampton University in Virginia. Later, she joined the Philadelphia college of osteopathic medicine to earn a Master’s degree in Biomedical Science.

Upon graduation, she went for a Doctorate at Des Moines University in Des Moines, Iowa. Similarly, she completed a 3-year residency program at Inspira Health Network in Vineland, New Jersey.

Dr. Ebonie Vincent built her interest in foot anatomy. But besides this, she has also done several rotations in specialties like Emergency medicine, radiology, internal medicine, Vascular Surgery, and general surgery.